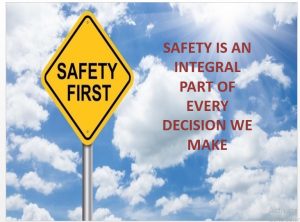 “Life is Priceless”
Every year lakhs of people lose their lives in road accidents, keeping this in mind CBSE initiated a road safety month from 18th January to 17th February on the theme ‘Sadak Suraksha, Jeevan Raksha’. our school implemented this theme by conducting different activities.

The initiative ‘Ek Bharat Shreshtha Bharat’ was announced by honourable Prime Minister on 31st October 2015 on the occasion of the 140th birth anniversary of Sardar Vallabhbhai Patel.
Odisha was the state paired with Maharashtra, emphasis was given on culture, tradition, heritage, etc. for bonding between the states there by strengthening the unity and integrity of India. By the faculty of the RMS teachers it is the small efforts towards this theme. 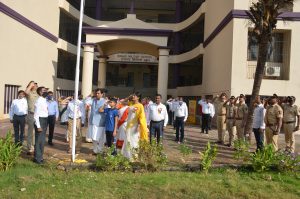 ‘Never forget the heroes who sacrificed their lives t bring up this glorious day to India’, keeping this in mind we celebrated 72nd Republic Day in our school in a short and concise way.The whole RMS faculty was present for this occasion. The flag was unfluted by our beloved Chairman Mr.Rajiv Gharat Sir with Principal Mrs.Arti Jha, Mrs. Rachana Gharat and respected chief guest. 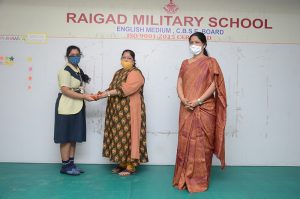 ‘The starting point of all achievement is desire. If one has the desire to succeed, one surely will.’ With this in mind and to boost the morale of the students, RMS held its Annual Prize Distribution ceremony. It was indeed a proud moment not only for the recipients also for their parents.

‘Science of today is the technology of tomorrow’
National Science day was celebrated by the students of Raigad Military School on 28th February 2020. This day is celebrated to remember the great invention by the Indian Physicist Chandrashekhara Venkata Raman who discovered ‘Ramans Effect’. Students of Raigad Military School, held a special assembly to mark this occasion. The day began with Introduction of our Scientist Dr. C.V. Raman followed by speeches. Students from Std V to IX participated in Quiz Competition and innovative projects. It was indeed a very knowledgeable day in which the main motive was to spread a message about the importance of Science used in the daily life of the people. 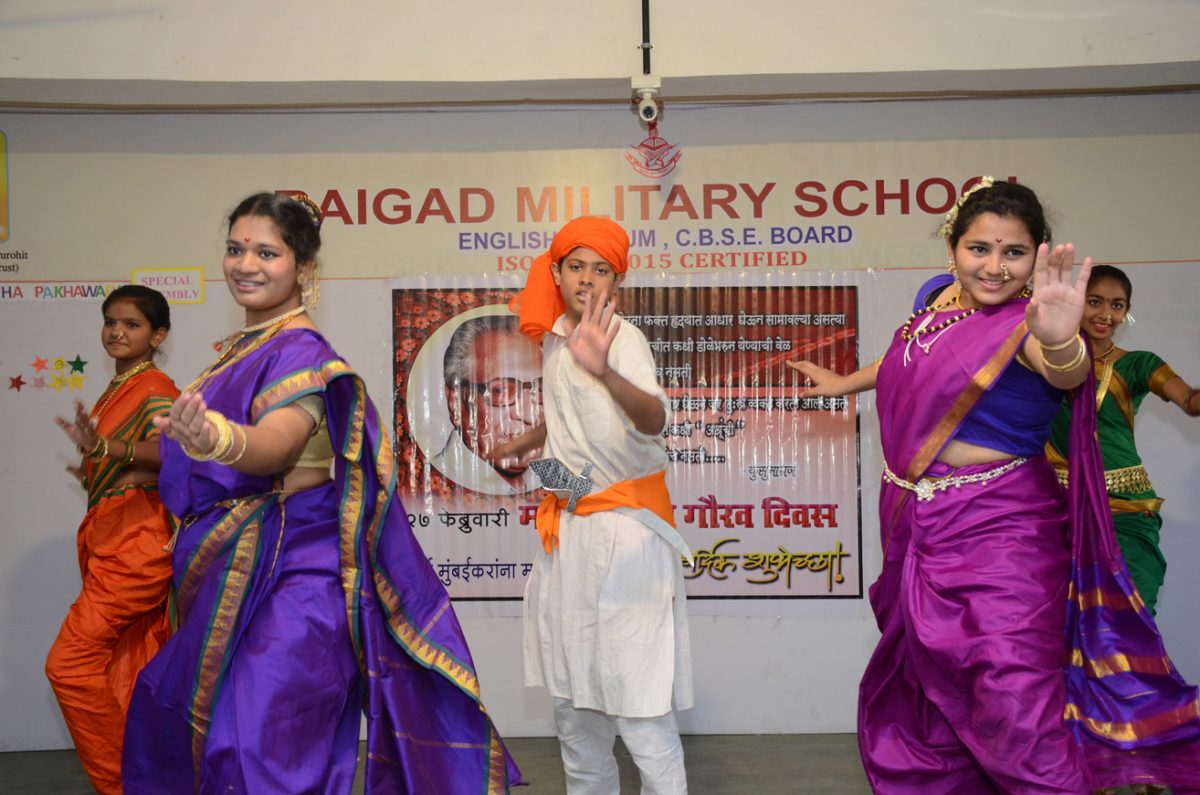 Marathi Bhasha Diwas is celebrated in honour of the Marathi language. It is celebrated every year on 27th February to rejoice the birth anniversary of Dyanpeeth award winner late poet V.V. Shirwadkar who is also known as Kusumagraj.
Marathi being the official language of the State of Maharashtra, the main focus of this celebration was to promote the Maharashtrian culture amongst the students of RMS. Students participated in the various categories of poem and choral recitation in Marathi, stunning dance performances were performed.
By actively participating in the Marathi language day celebration, students and teachers got an opportunity to display an appreciation of the multi-cultural world.

School election process is a time where students get to know about the process involved in choosing the right candidate for a particular post, by using their right to vote and choose a governing body which represents the students of the school as one.
The Student Council Election for the session 2020-21 was held in school premises for electing students for the post of Head boy,Head Girl, House Captains, and House Vice-Captains.Students took an active part in the selection process which started almost a month back before the actual election process happened.The potential nominees were declared to the members of the each house for the posts made available.
Nominees were selected and judged on their class performance,co-scholastics, participation in school events, individual efforts and initiatives, general attitude and behaviour, and speech. Each house conducted the polling procedure at different corners of the premises.Students casted their vote one after another as they received an identification mark on their index finger as a sign of participation.A sense of secrecy and respect for voting could be seen during the election process throughout.It was an interesting event altogether.

Raigad Military School celebrated Chhatrapati Shivaji Maharaja’s birth anniversary in our school in order to create awareness in the young minds of the children regarding the valiant Maratha warrior.The celebration began with the special assembly in which students give speeches and sang songs on the bravery of Shivaji Maharaj.Our tiny tots of Pre-Primary section(Nursery, Jr.Kg & Sr.Kg) were dressed as Shivaji Maharaj and Jijabai which created royal impact on everybody’s mind.
Over all, the costumes, stage decor, melodious singing of students left mesmerizing effect on the minds of everybody out there.It was a wonderful event. 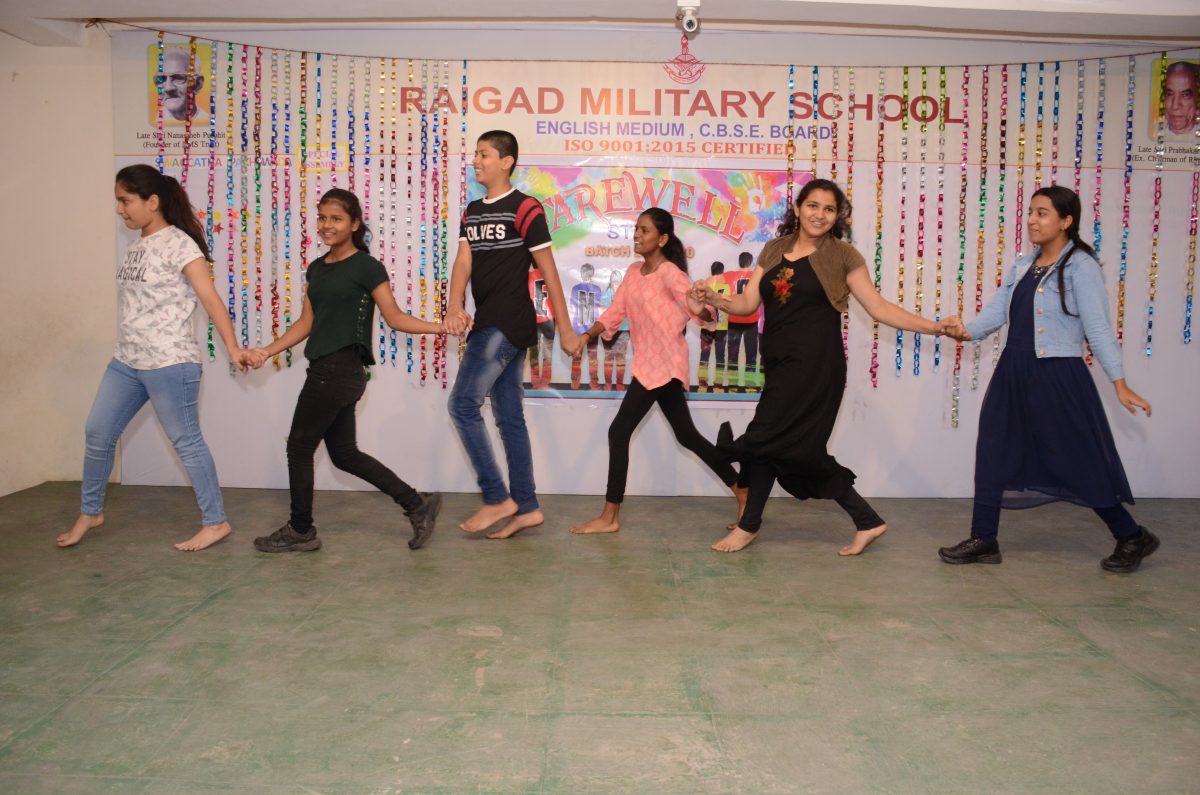 The Farewell was organised by the students and teachers of Raigad Military School, where the students of Std IX bid farewell to the outgoing students of Std X with great enthusiasm. Students of Std IX presented skits, group dance and solo singing performances which entertained the audience to the fullest. Many interesting and tricky games were played to pep up the environment. Different titles were awarded to different students. Token of love was given to all the outgoing students.
Summing up, the day was great, filled with nostalgia, fun and excitement. 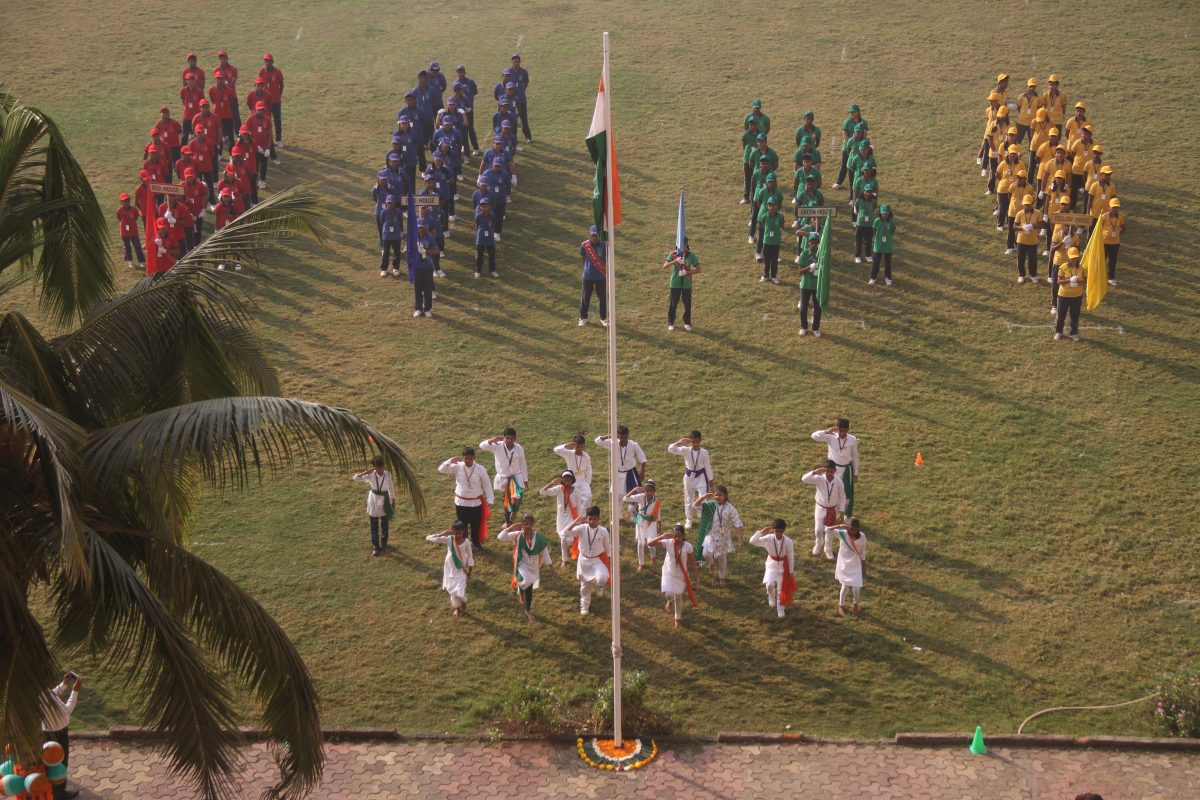 Our tiny tots did an activity for Republic Day in which they made a flag using fruits to denote tricolour  of our National Flag. Children enjoyed the moments of joy and happiness in the company of their mates and teachers. 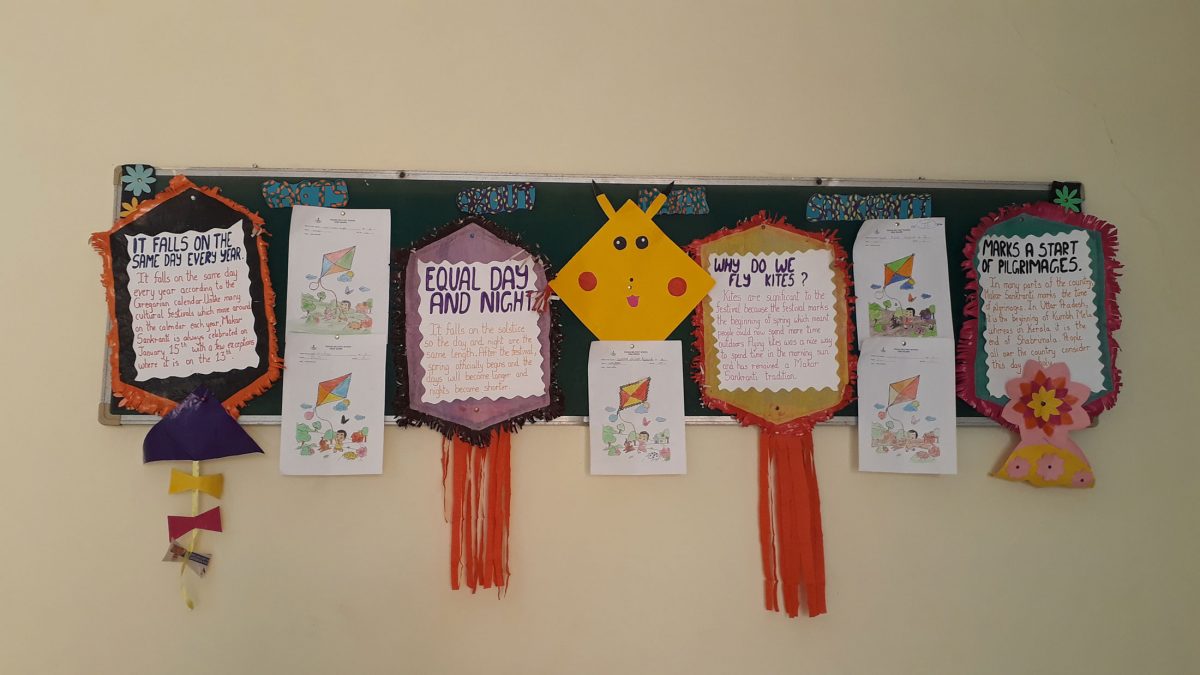 The children of Raigad Military School celebrated Makar Sankranti on January 14, 2020 with an Assembly on the occasion.The Assembly started with a special message to mark the occasion. The children were told about the importance of Sankranti and how the festival is celebrated in various States of India.To add another blooming bud to the bouquet of activities, a Kite Colouring and Kite Making Competition was organized for the students.It was wonderful opportunity for the students to showcase their creativity.On the whole the competition was full of colours and innovative thoughts. 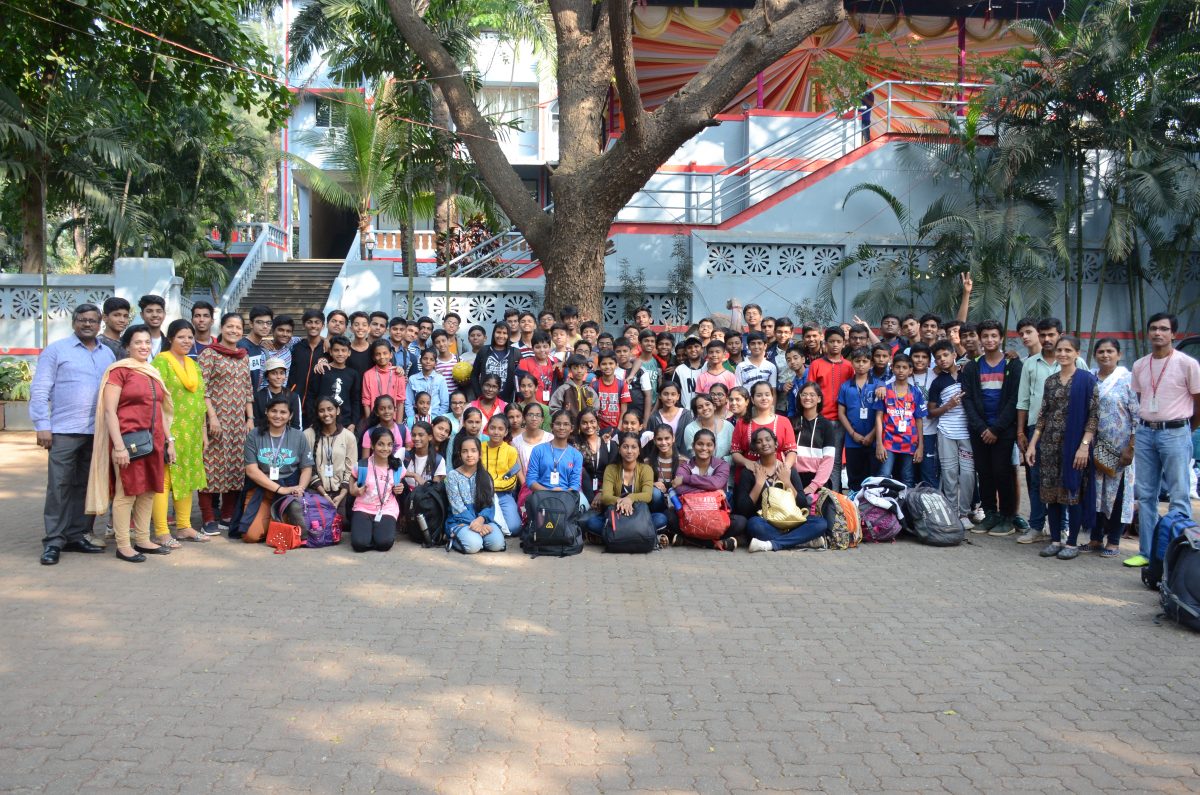 Raigad Military School believes in imparting practical knowledge to their students and in one such endeavour, the school took Std VI to X for an  overnight trip to Monteria Resort Karjat, Khopoli. 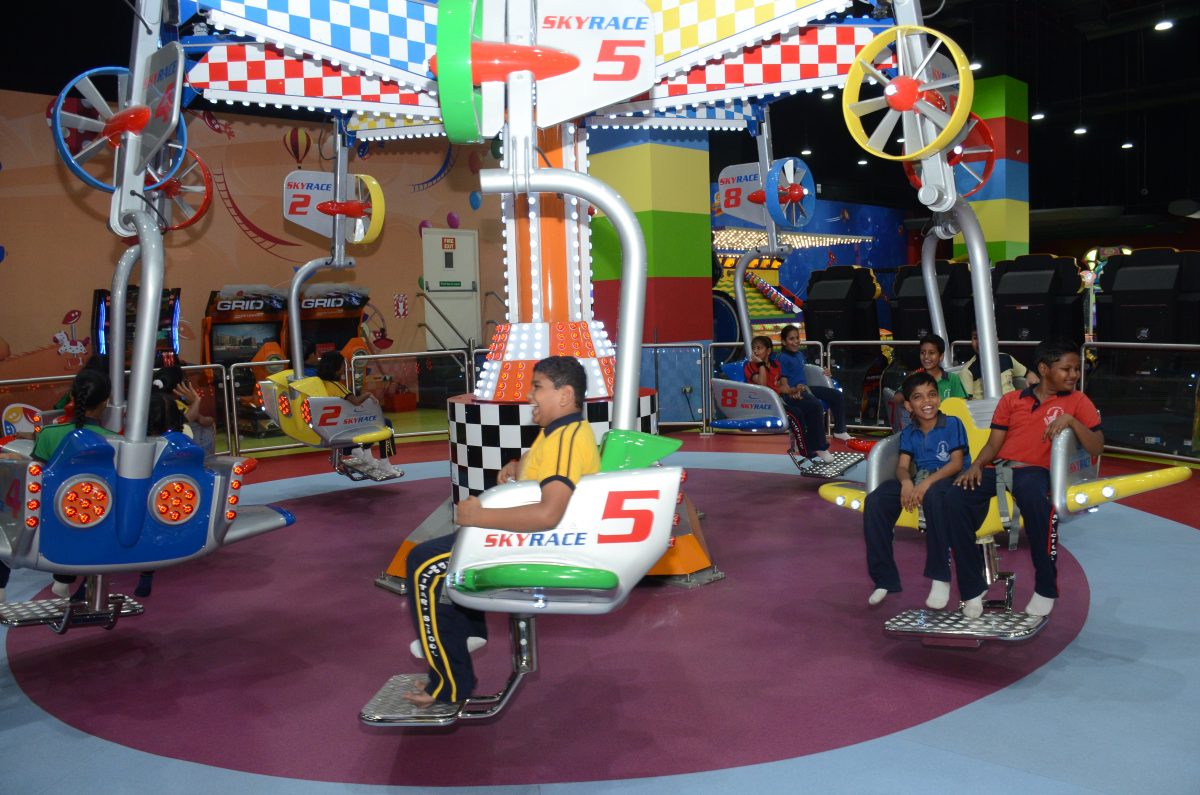 “Just education is not enough; children must have sunshine, freedom and playtime”

Most awaited day for children is a school picnic. Raigad Military School arranged for day picnic for the students from Pre-Primary(Nur, Jr.Kg & Sr.Kg) and Std I to V to Viviana Mall, Kids Play Area, Thane.The kids found themselves in all P.T attire to bounce on this exciting day. They enjoyed rides, fun activities, singing, and dancing. It was real fun and enjoyment for the students. 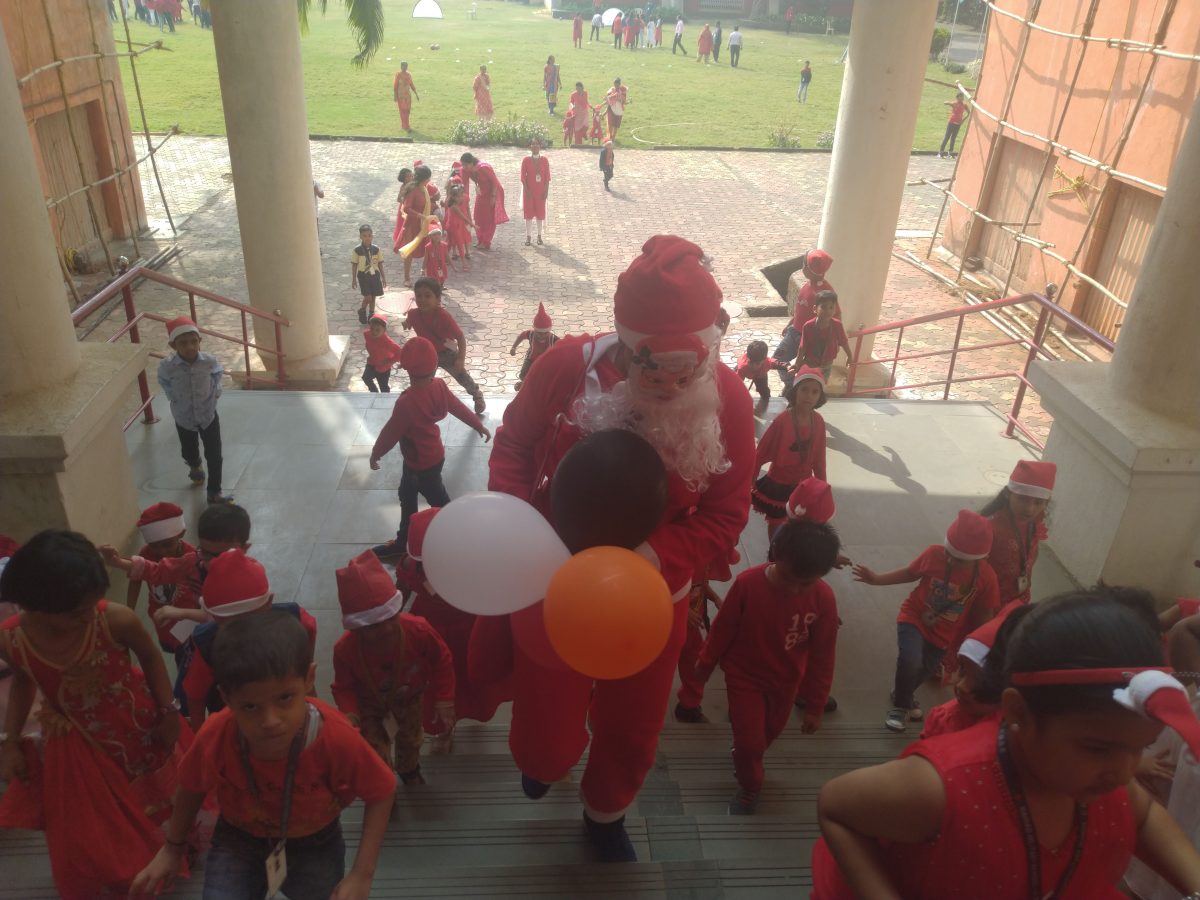 Christmas is the festival which inspires the spirit of sharing and caring.Soaking in the spirit of Christmas Raigad Military School celebrated the festival with enthusiasm.The school was beautifully decorated and everybody was dressed in red and white(Santa’s favourite colours).There was a carol presented by our little angels.The students and Santa danced to joyful tunes.Fun games were conducted.Christmas cakes and gifts were distributed to the students.The boundless joy of celebrating the festival was visible on the faces of all children. 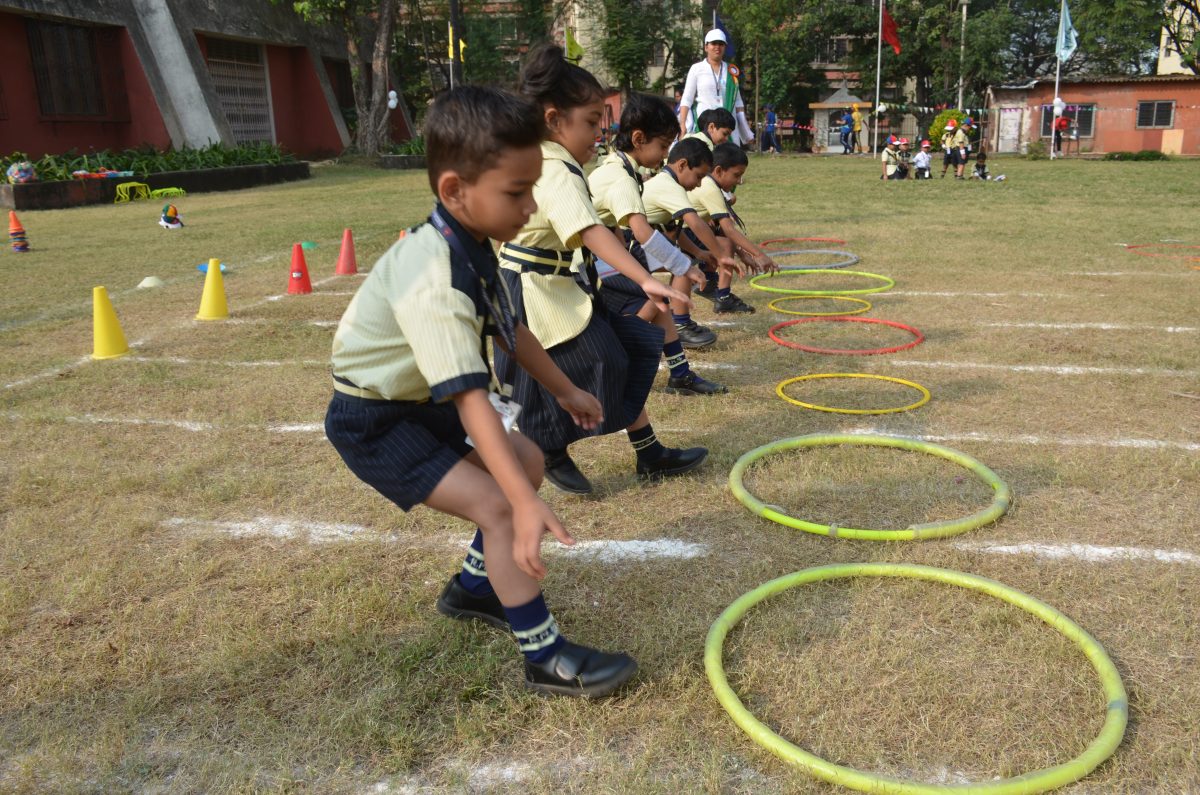 The much awaited Annual Sports Day was held on Friday 6th December 2019, with great zeal, excitement and frolicsome atmosphere in the school playground. The programme began with the Chief Guest-Mrs. Kanchan Madhukar Pawar ( Ex-Chief Executive, CHJB), Mrs.Arti Jha (Principal) & Mrs. Rachana Gharat welcoming the esteemed gathering and emphasised of the sports in a child’s life. They also took the salute of the impressive March Past of the students, coupled with some stirring marching music by the band.

The students entered into the spirit of the occasion in a grand way with the oath being administrated by the Sports Captain. Once the races began, the air was filled with cheering and tons of encouragement for the young athletes.The proud parents could be seen filled with happiness to see their child performing.

The medals & the certificates were awarded to the winners of the various sports events. The Green House lifted up the Champions Trophy followed by the Blue House as 1st Runner up. The event ended on a good note by thanking our Chief Guest, Management of RMS School, Our Staff, Students & Parents. 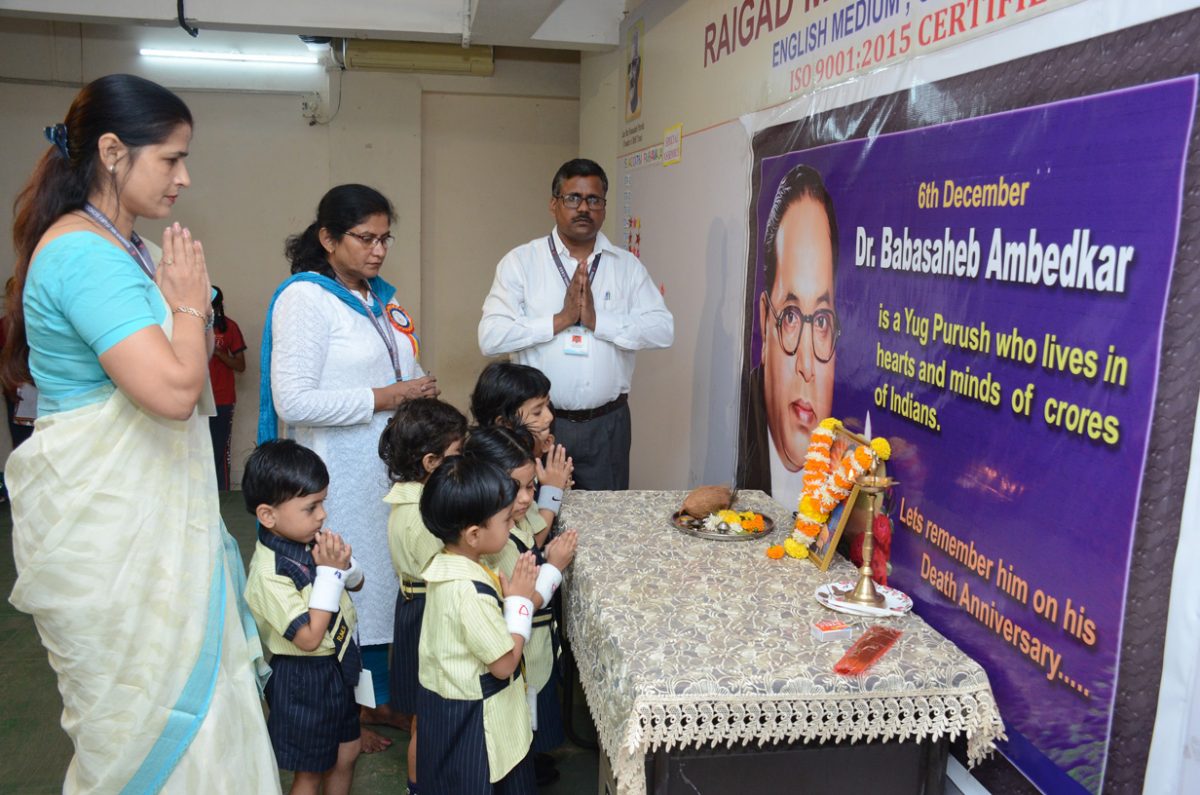 To pay homage to the father of Indian Constitution, Raigad Military School celebrated Mahaparinirvan Diwas (Death anniversary of Dr. B.R. Ambedkar), with devotion and respect. A Special assembly was conducted to mark the occasion in which students presented speeches on life history, milestones and contributions of the Great Indian jurist and social reformer. 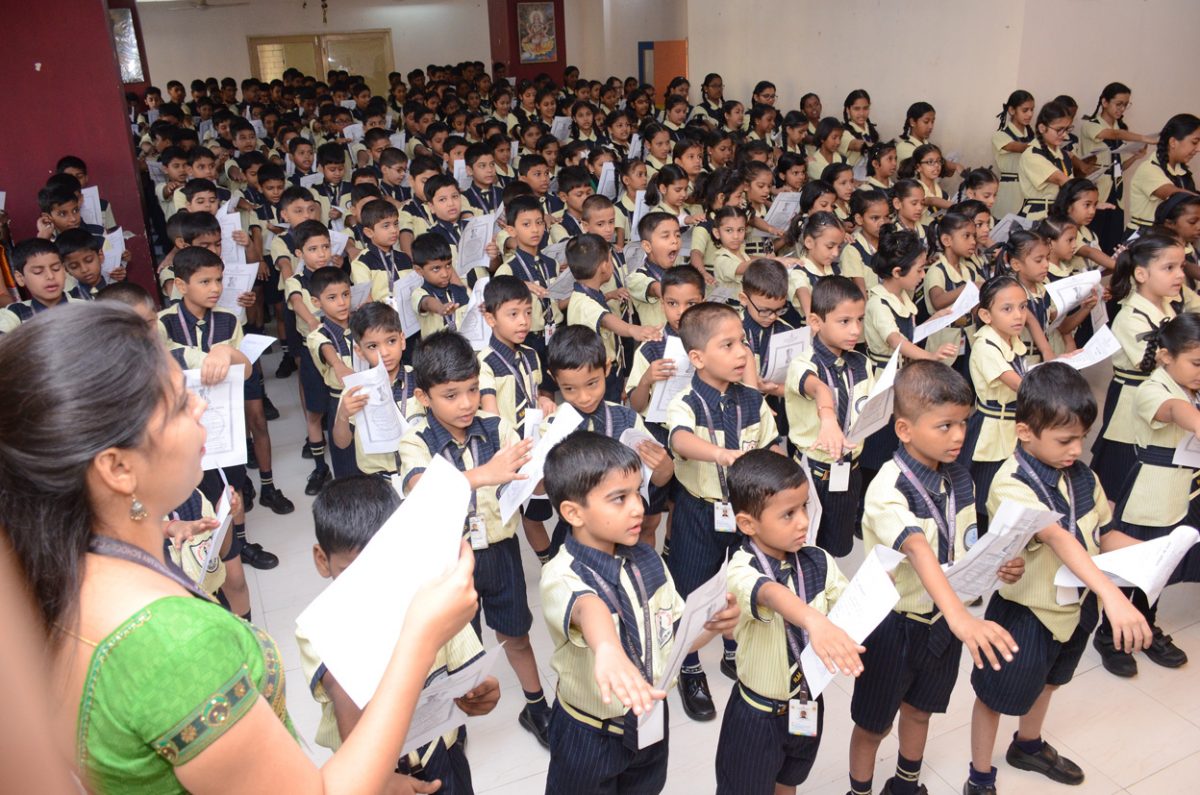 Constitution Day or Samvidhan Divas celebrated in Raigad Military School, on 26th of November to honor and remember the father of Constitution, Dr.Bhimrao Ramji Ambedkar the architect of the Indian Constitution.The students were made aware about the Preamble of the constitution as part of the celebration and Pledge taken by teachers and students. 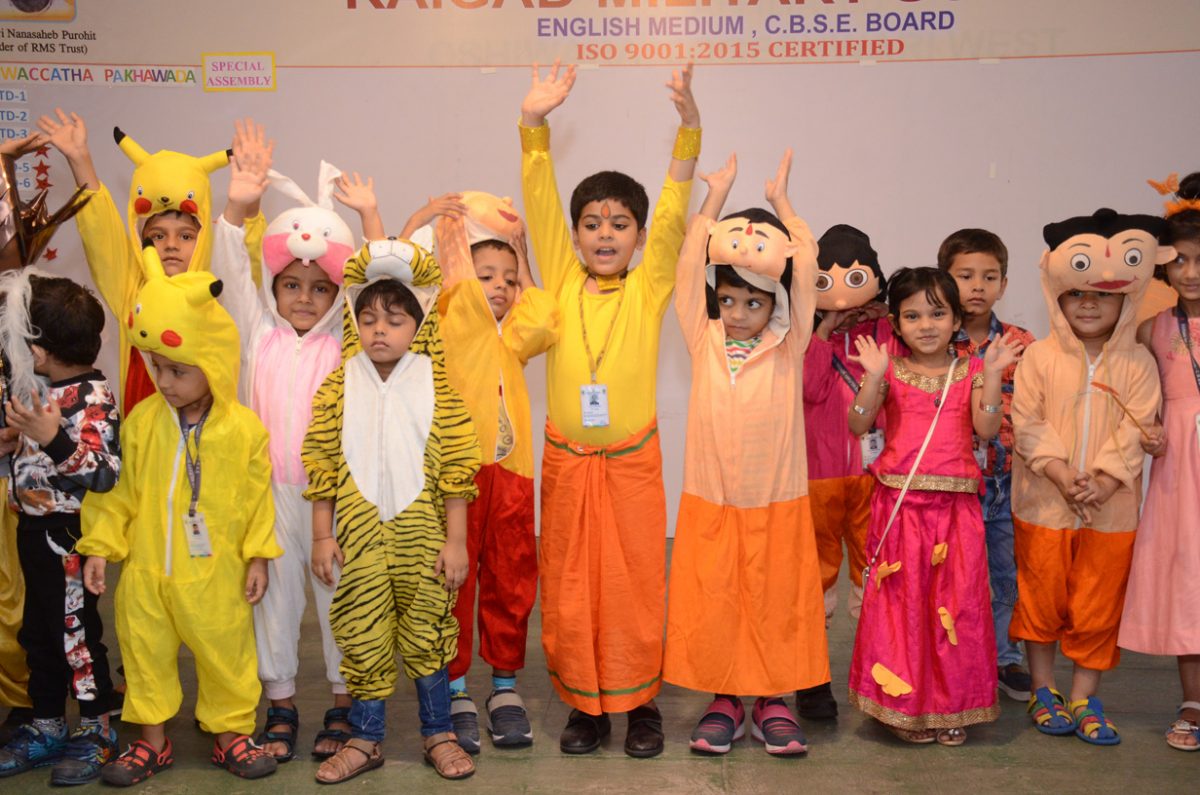 Students of RMS Pre-Primary (Nursery, Jr.Kg, Sr.Kg) section participated in “Fancy Dress Competition”.The theme was “Cartoon Character”.
It was the most awaited event of the year, as it is always a pleasure to watch the toddlers dressed up as different characters.It was overwhelming to see our little ones speaking confidently.This activity helped the students of the Pre-Primary section to overcome their stage fear, bring out their inner talent, give them a platform to build their self-confidence and explore their inner strength. 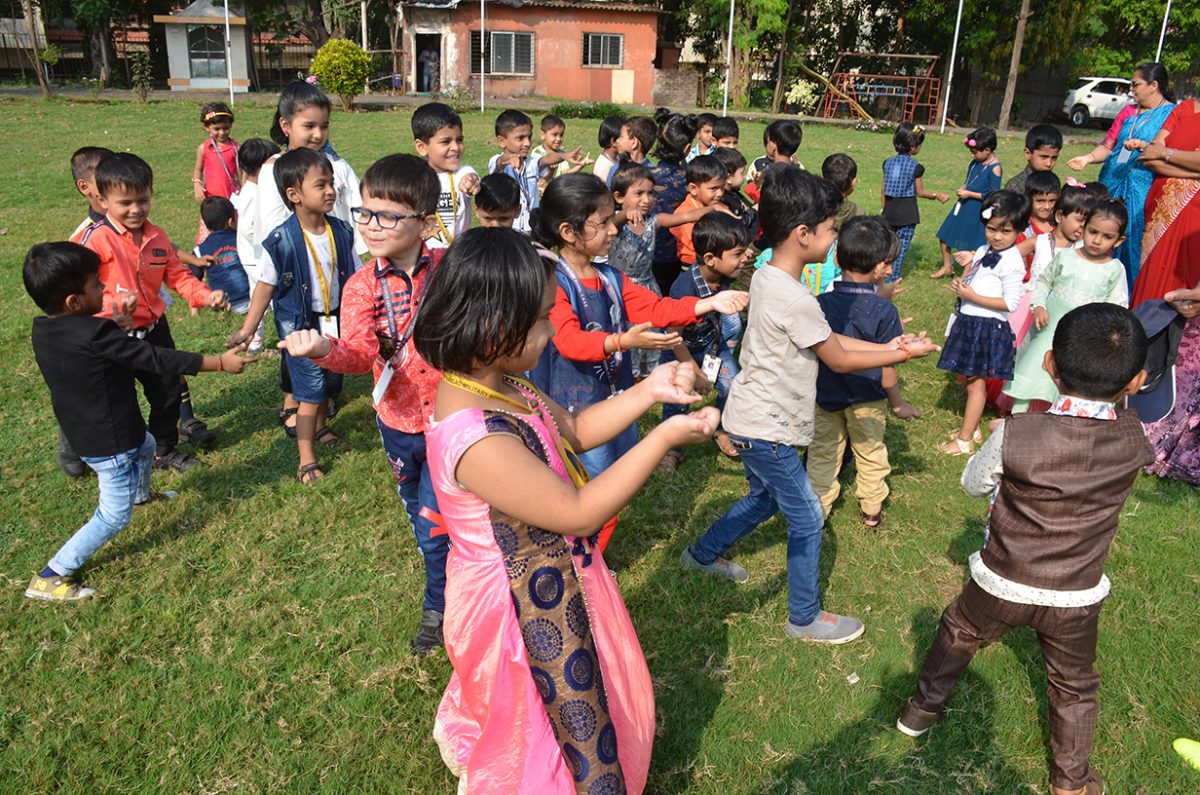 On this day a Assembly(Prayer,News,Facts,Special Items,Pledge,National Anthem) was conducted by teachers to show their love and affection for children and make their day special.
As we all know the essential benefits of meditation for the children and adults, the management of RMS had organised A Meditation Session for the students and parents of school. It was conducted by Dr.Naavnidhi K Wadha (Founder of Inner Ziva Meditation). Different fun games were conducted for students which they loved and enjoyed.The day celebrated with the spirit of childhood in a fun-filled and stress free environment. 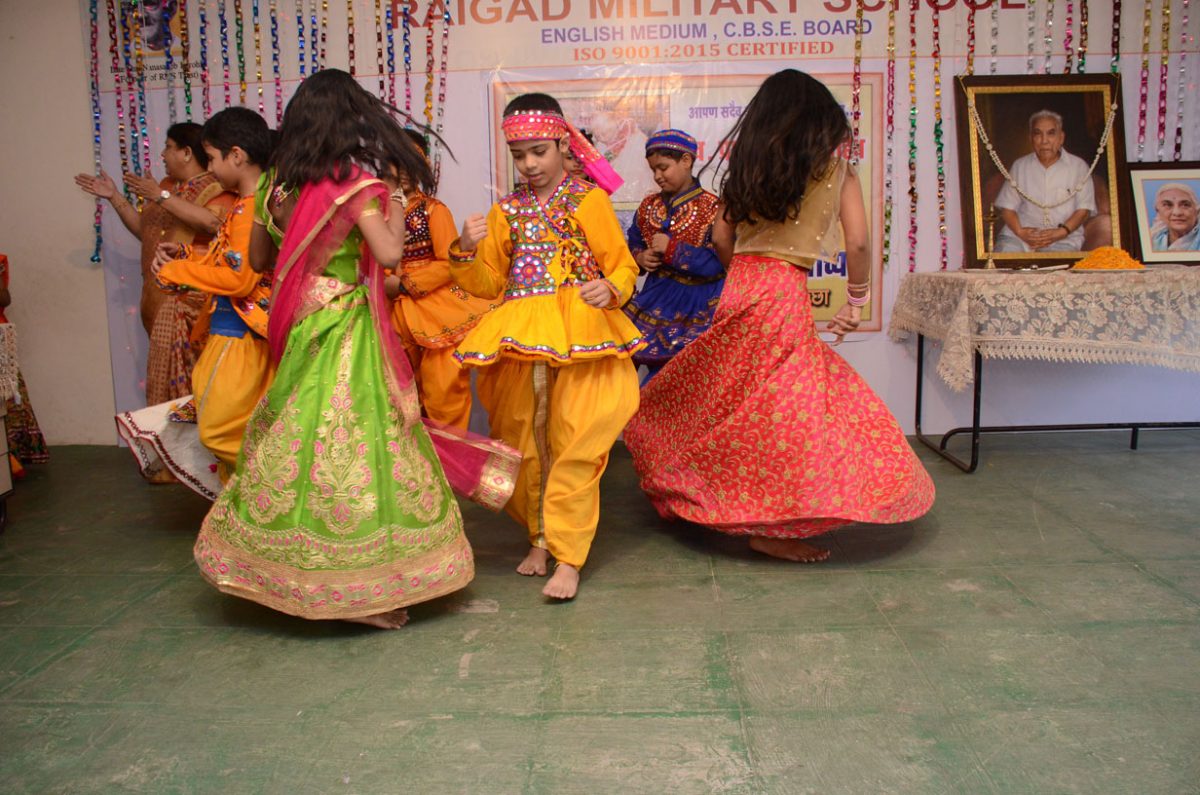 Dussehra, the festival to celebrate the victory of good over evil, was celebrated in school with a lot of zeal and fervour. All students and parents were dressed in authentic traditional attire to participate in the much awaited garba competition.The event ended on a good note by giving away the prizes to winners for the Best Costume & Best Dance to the students as well as to the parents.RMS management thanked all it’s members, students & staff, for making this event a huge success. 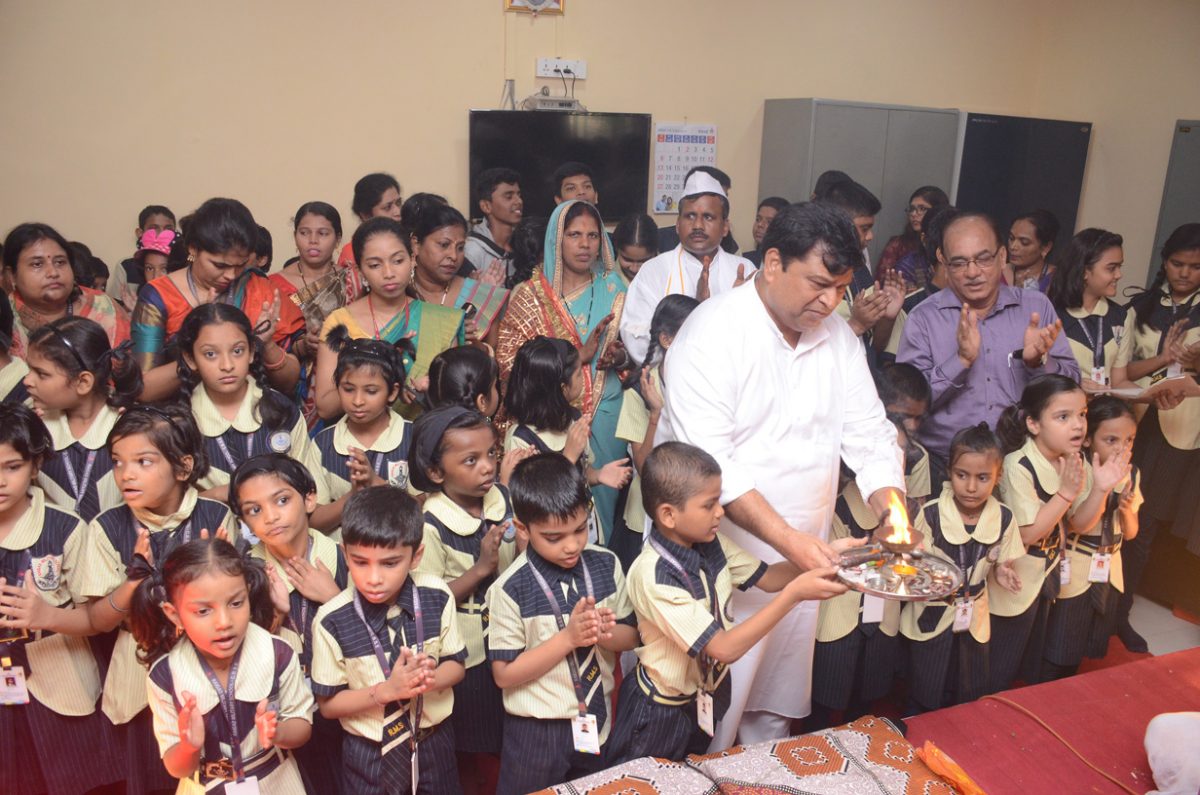 Like every year, the Management, Staff & Students of Raigad Military School performed the Satyanarayan Pooja on Navami as it is the last day of the nine-day long festival of Navratri.On the same day, Inter-House Rangoli competition was held for the students with an intention to remind them of the various traditions around us.The resopnse of students towards this event was over whelming.The event ended on a good note with many pleasant memories. 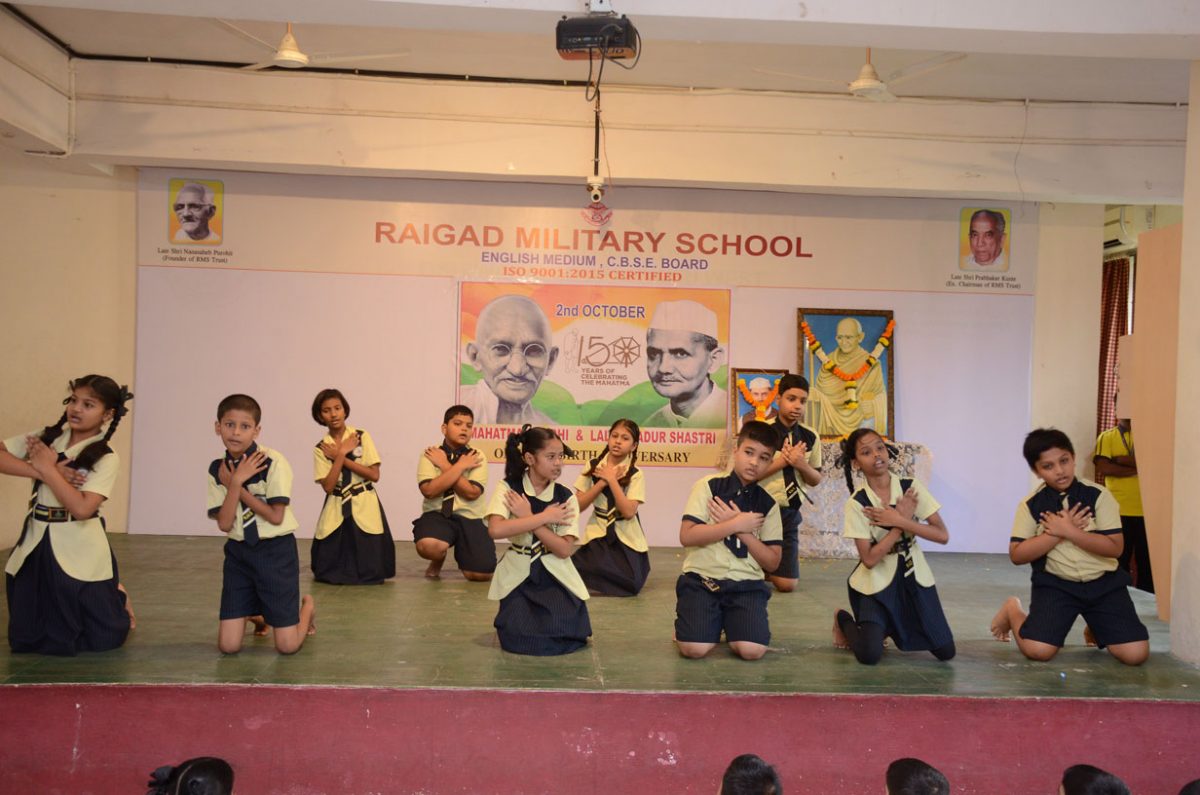 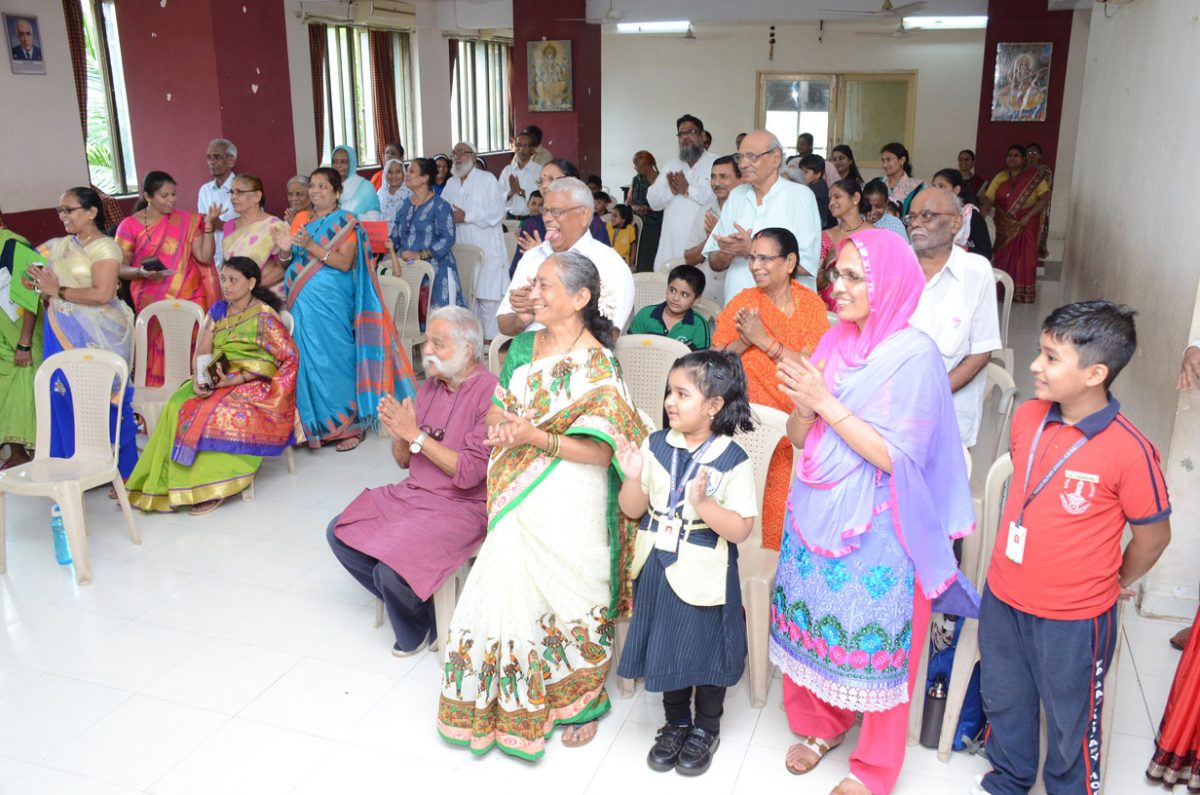 Grandparents Day Celebration was held at the school to honor grandparents, to give grandparents an opportunity to show love for their children’s children, and to help children become aware of the strength, information, and guidance,experienced people can offer. 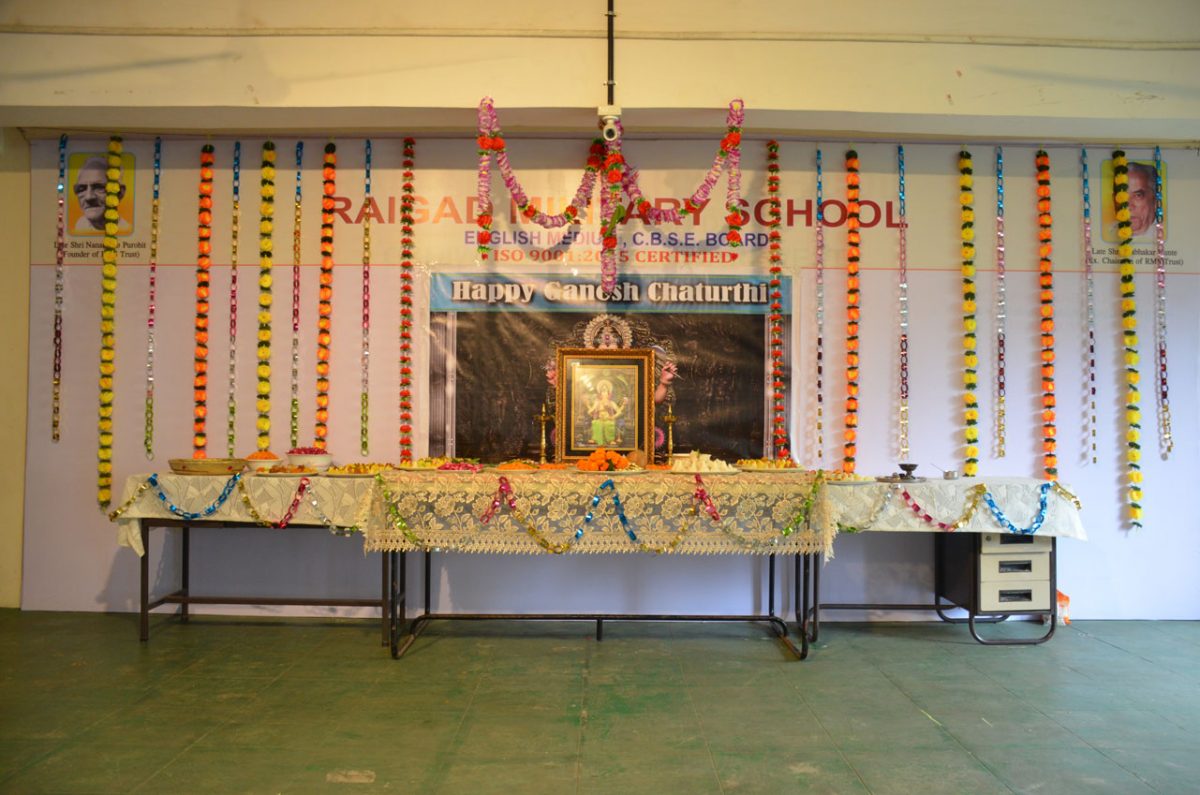 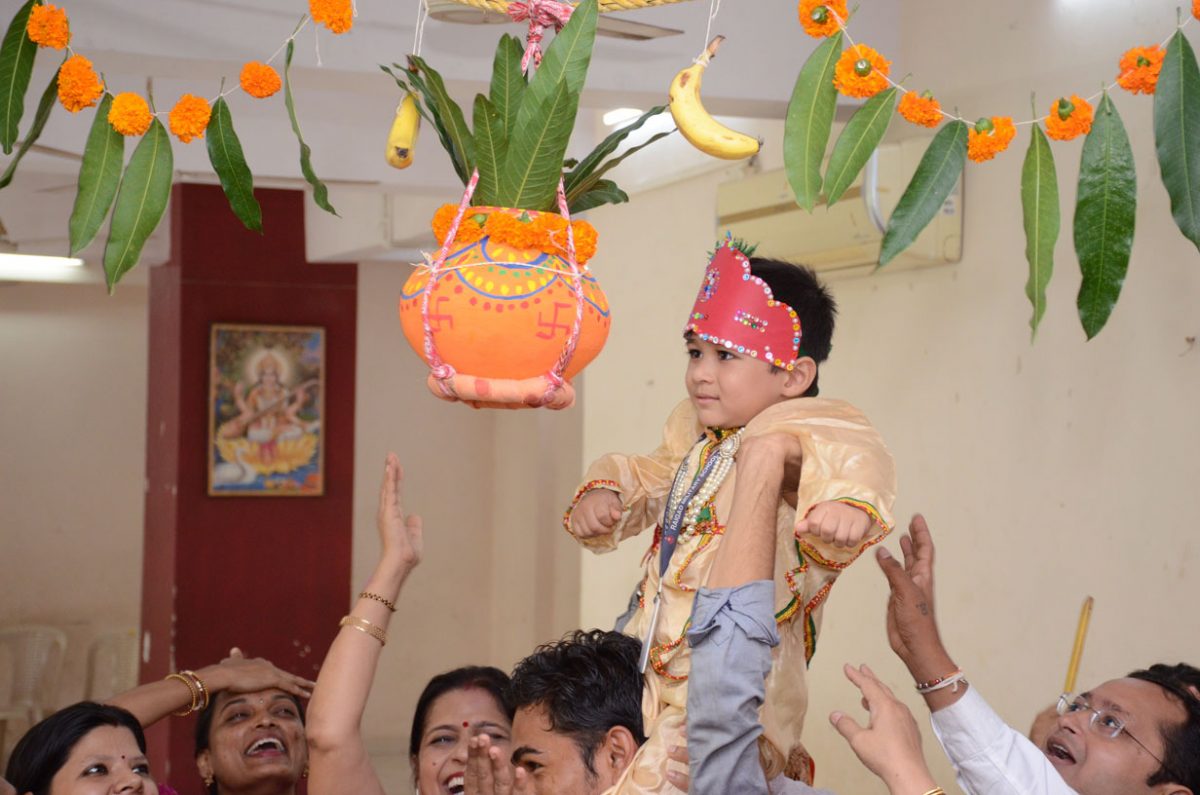 Dahi Handi celebration was held at the school ground for the occasion of Janmashtami for the Senior Students and in the school hall for the Pre-Primary and the Primary Students, where the kids were dressed like Radha & Krishna. A small cultural program was organised for the students.  Studenrts were given prizes/ certificates for the Best Dressed Radha & Krishna. 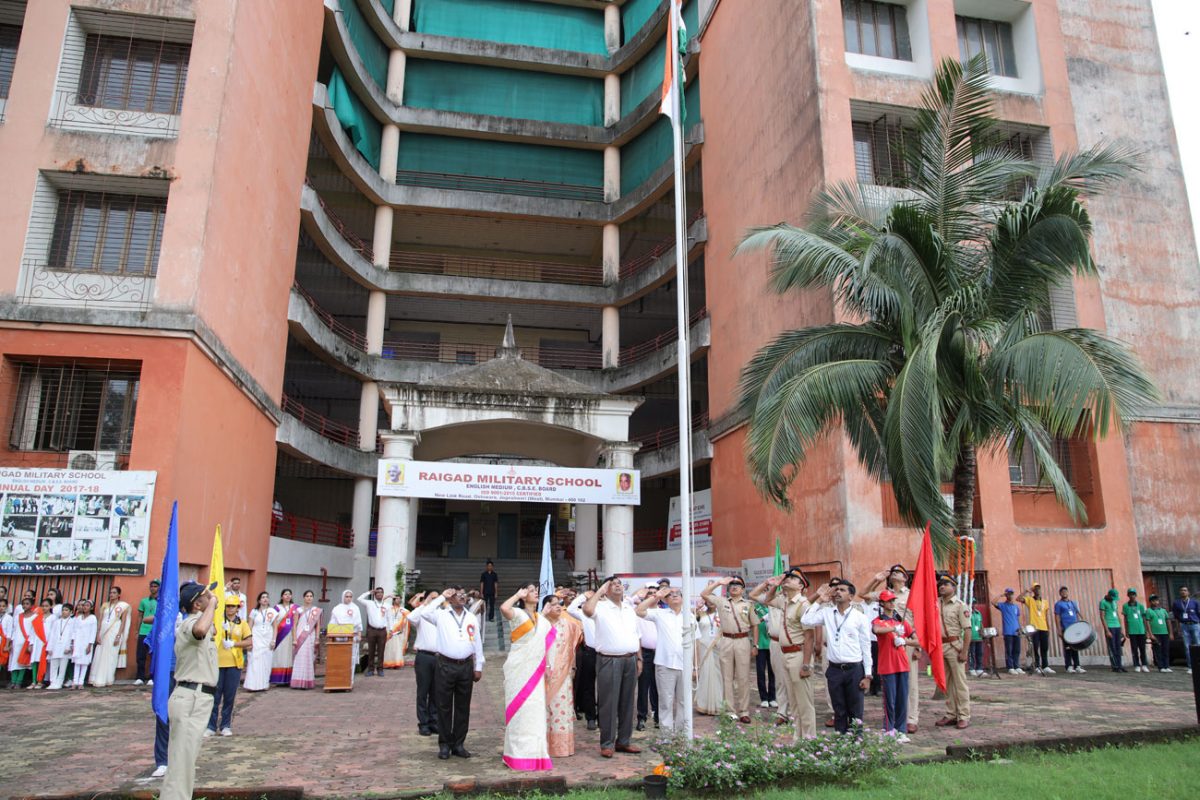 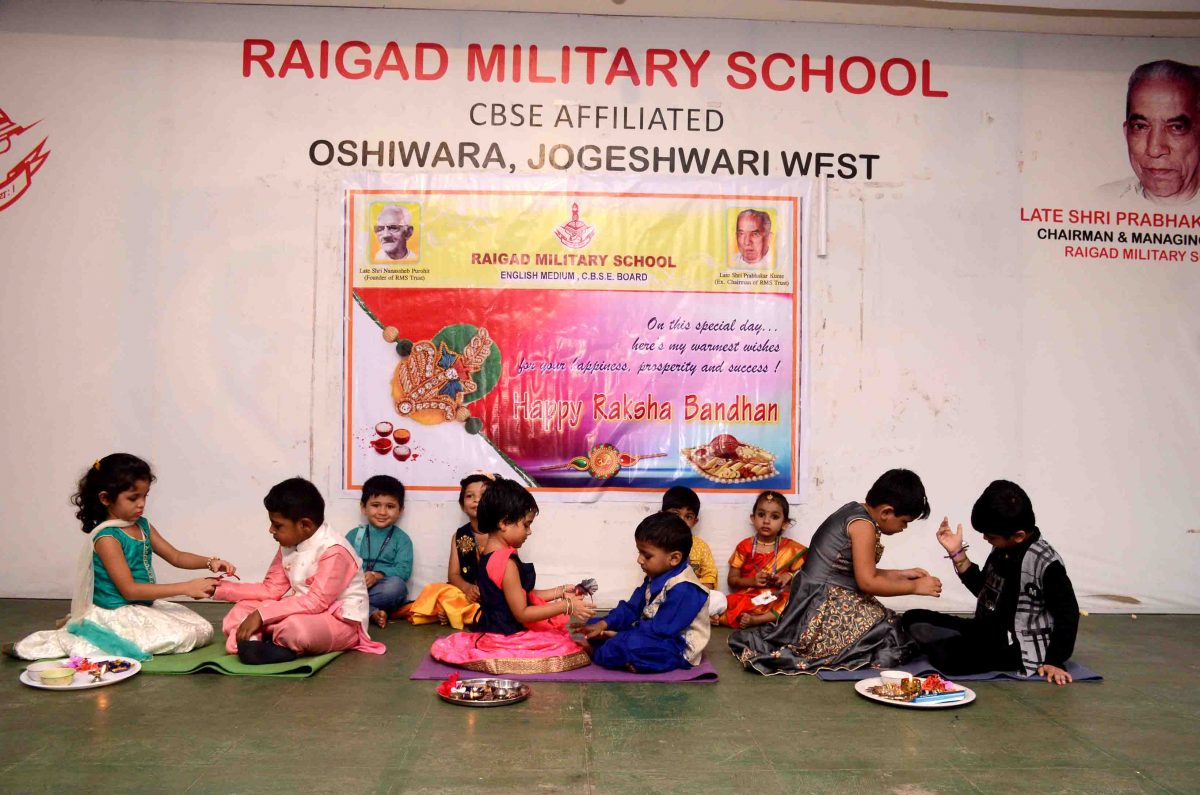 Raksha bandhan was celebrated in the school to symbolise the bond between brother and sister in the presence of Mrs.Rachna Gharat,Mrs.Arti Jha(Principal) & all teachers. The students wore traditional clothes.The brother promised that they will protect their sisters from every evil. 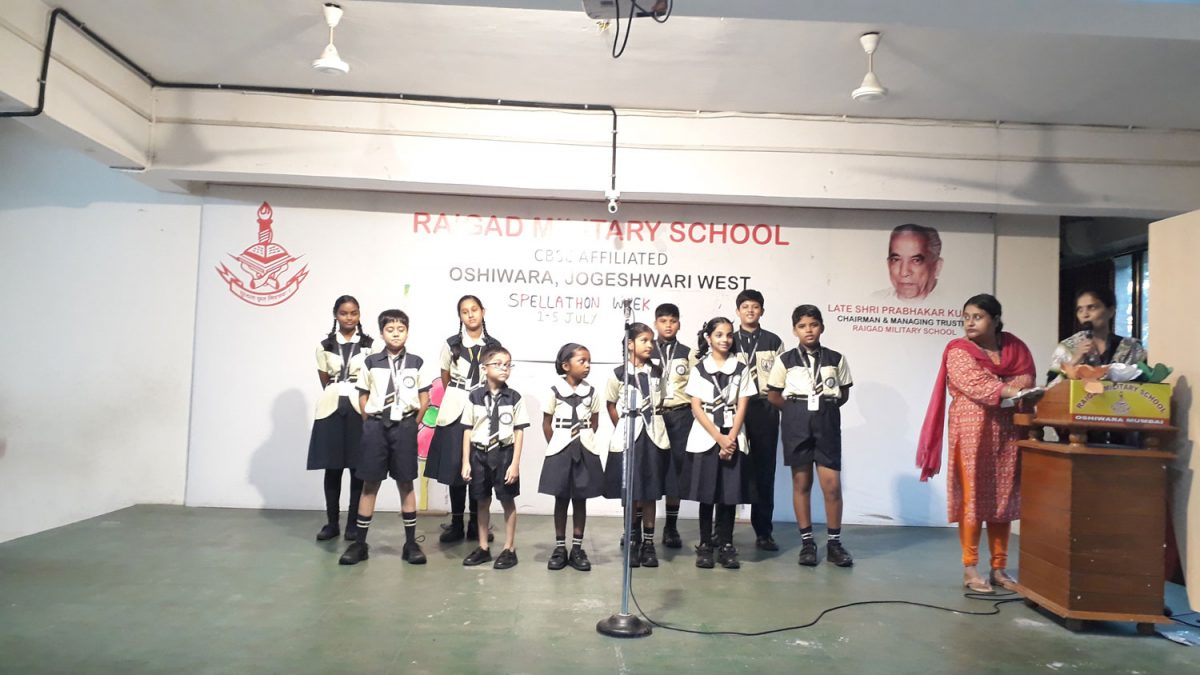 Spellathon week was celebrated in the school for week long. School held the spell check competition for all the students from class I to X. 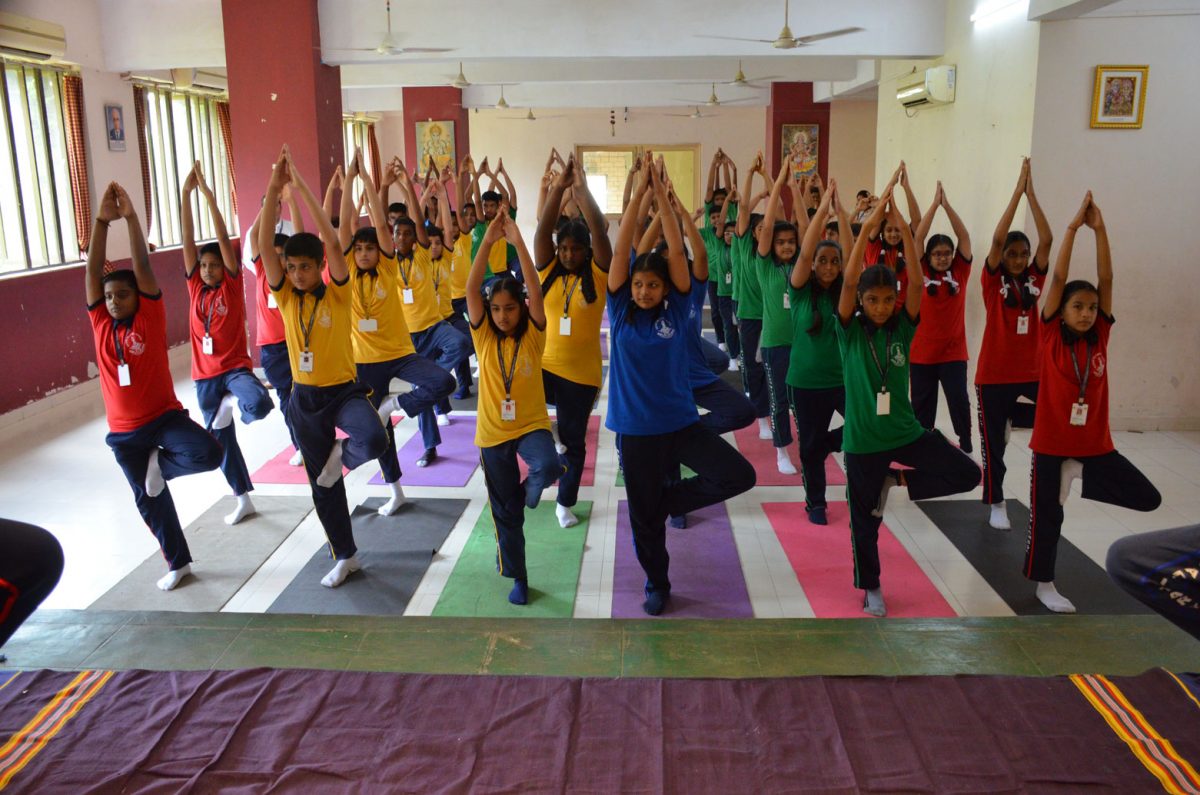 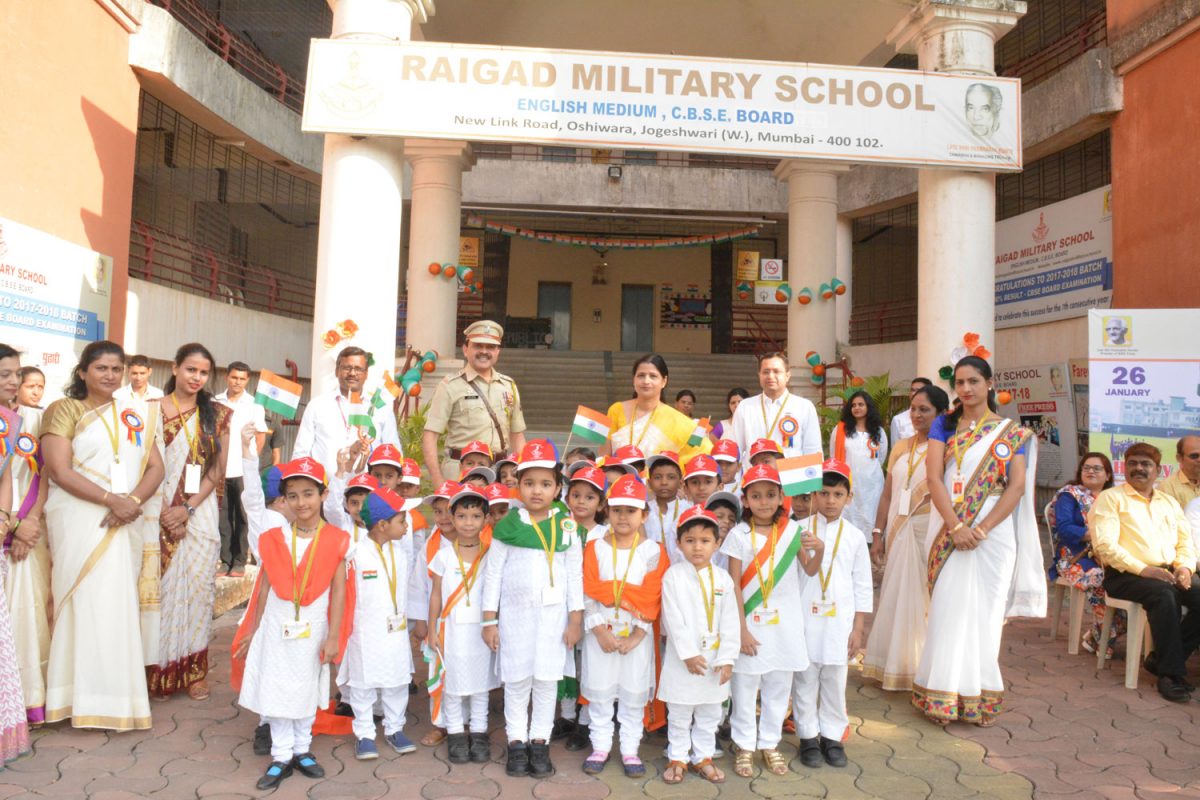 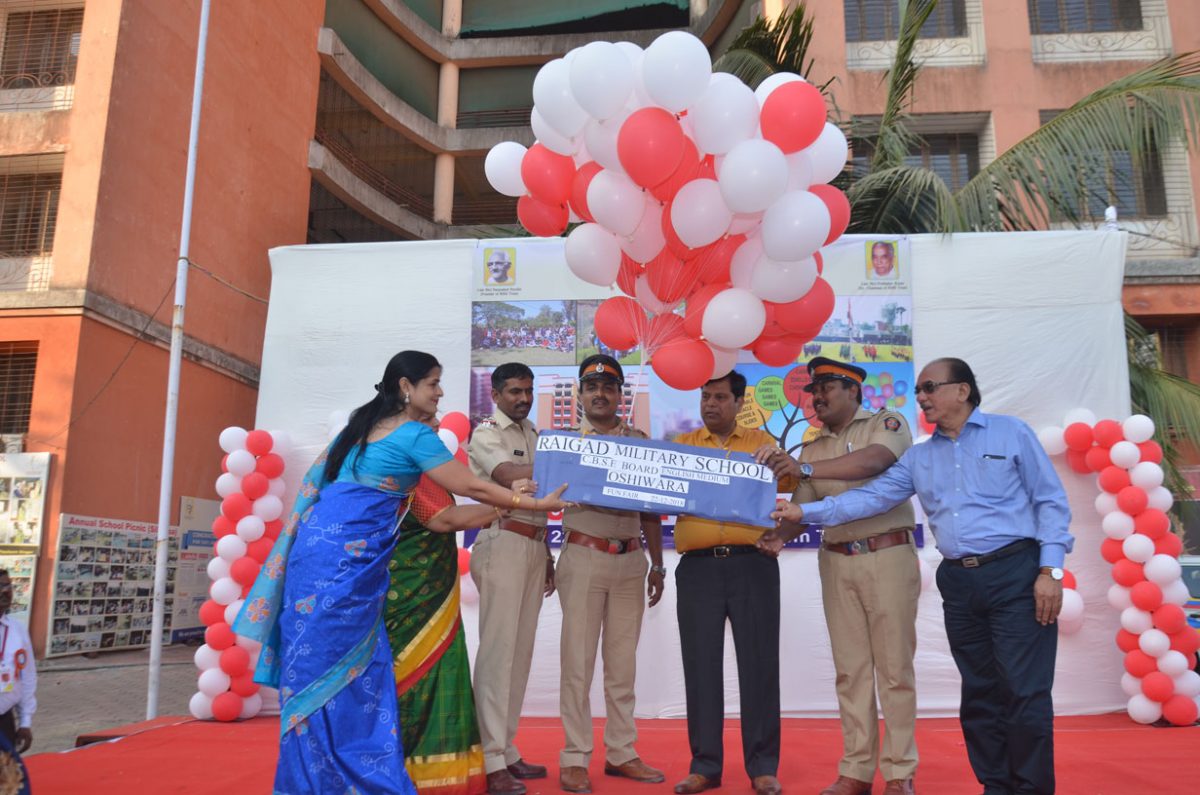 Raigad Military School had organised its first Fun Fair to celebrate Christmas.The program started at 5.30 p.m. This inaugurated by the hands of Chief Guest API of Oshiwara Police Station Mr. Gije along with Mr.Rajiv Gharat (Chairman & Managing Trustee),Mrs.Rachana Gharat & Mrs.Arti Jha(Principal) by releasing the balloons. It was a great event where all the Teachers, Staff Members, Students & their Parents loved to be a part of it.